If you are interested in helping the Stars/Jets organize a Golf Tournament? The next meeting is Thursday Dec. 2 at 7:00pm at KCIC.  For questions please contact Amy at amybriscoe@kcstarshockey.com or 913-660-2100.

TRAVEL HOCKEY: KC Stars Gold+ Travel Teams are formed in the 10U Squirt, 12U Peewee, and 14U Bantam divisions. Teams play in the Midwest Hockey League against teams from Iowa and Nebraska and also attend invitational tournaments in the mid-west and central part of the US. Travel Tryout Evaluations are in August.

Interested in Coaching? We'd love to have you! Please email Dean at dnelson@kcicecenter.com and register yourself using the below link.

Please click the following link to register. Login with your current Sport NGIN account or create a new one.

KCYHA is excited to announce our new Partnership with GuardLab.  We have worked with GuardLab to develop three customized mouth guards for each of our Clubs. You have the opportunity to pick your own design and add your name and number on the mouth guard to make it your very own. 15% of all proceeds from these premium mouth guards will be given back to KCYHA. 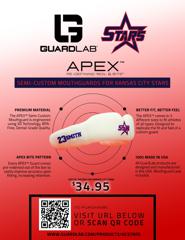